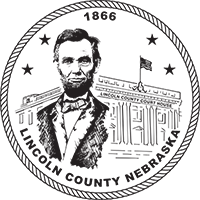 I want to welcome you to the 2022 Election page of the Lincoln County, Nebraska website.  I hope you use this page often in 2022.  This page is one of the ways you will be able to obtain accurate and up to date information on the 2022 elections.

I encourage you to browse all the information available.  If you are unable to locate the information you are searching for please don’t hesitate to contact my office and we will be happy to assist you.

Your comments and suggestions about this page would be greatly appreciated.  My goal is to bring you the information you are seeking in a user friendly format.

Please be advised these are sample ballots and because the law requires rotation of the candidate’s names, the chronological order as listed may be different in your precinct.

Some listed candidates are elected in specific districts and because of this some names listed on the sample ballots may not appear on the ballot in your precinct.

You may go to Voter Check by using the big button on the Home page.  Insert your Name and County.  This will tell you your polling place and give you a pdf of your ballot.

Disclaimer:  This is an abbreviated calendar.  If you would like to view a detailed election calendar please visit the Secretary of State 2022 Elections Calendar

To check if you are a registered voter, click here.

How many election precincts are in Lincoln County?
14 Precincts within the city limits of North Platte
10 Rural Precincts
24 Total

The Lincoln County Clerk’s Office must appoint an election board to serve in each precinct in the county on election day. Good poll workers are a necessity for the election process to work.

We are currently looking for recruits. A poll worker must be a registered voter in Lincoln County and be able to work on election day from 7:00 a.m. to approximately 9:00 p.m.

Once appointed, even if you volunteered, poll workers enjoy the same civil leave protection as those who serve on jury duty. Your employer must allow an employee the time to serve without threat of or loss of personal or holiday pay, sick leave, loss of overtime pay, or any other form of penalty for absence from work when serving as an election poll worker.

Should you decide to become a poll worker, you will be required to attend a training session prior to each primary and general election.

Election judges and clerks are paid minimum wage ($9.00 as of 1-1-2016). In addition, messengers receive mileage and $10.00 for picking up and returning supplies.

Your paycheck will arrive approximately 3-4 weeks after the election.

Every two (2) years appointments are made for a two year term. You are expected to work at every election in that term. In an emergency, you may ask to be excused.

Elections are every two years in the even numbered year in May and November.

Are in charge of picking up and returning supplies for their election precinct. All election supplies must be returned to the County Clerk’s Office as soon as possible after the polls close at 8:00 p.m. Messengers are paid an additional $10.00 plus mileage for this service.

Polling places are subject to change with the conditions of COVID-19.The following changes have been made for the General Election 2021

Voter Information Who may register to vote?  Anyone who:

Who needs to re-register?  You must re-register whenever you change your name, your address or your political party affiliation.  Failure to do so will result in a delay at your new polling site on election day.

Will I receive notice that my mail-in registration his been accepted and processed?  Yes, if you completed the form correctly and mailed it by the deadline (Third Friday prior to the election).   If you do not receive notification within 10 days that your registration has been accepted, call the Election Commissioner. In Lincoln County, Nebraska the Election Commissioner is the County Clerk.   You are not a registered voter until you receive confirmation.

Who may apply for an early voters ballot?  Anyone who is registered to vote.

The following state offices are nominated on a partisan basis:

The following federal offices are nominated on a partisan basis:

The following county offices are nominated on a partisan basis:

The other elected offices in Nebraska are nominated on a non partisan basis. Note: Political party enrollment is your choice, but in order to vote for a partisan candidate in a primary election, you must be enrolled in that political party. If you register nonpartisan, you will only be able to vote for ballot issues and nonpartisan candidates in the primary election.  Offices such as President, Governor, State and County officials are partisan, therefore if you register nonpartisan you will not be able to vote for them in a primary election. You may request a senatorial or congressional ticket of your choice if you are registered nonpartisan in a Primary Election. In General Elections everyone votes the same ballot.